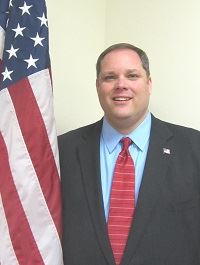 Mr. J.D. Stallings is currently serving his second term as Mayor. He was elected in November 2015 and began serving in January 2016. Mayor Stallings began serving on the City Council (District 3) in February 2014.

J.D. graduated from Upson-Lee High School in 1994. He received his Associate of Science Degree in Business Administration from Gordon College.

He has been employed by the Georgia Department of Transportation for over 20 years and was the past Georgia Department of Transportation Engineers’ Association State President. He is a Georgia Republican Party State Committee Member, a 3rd District GAGOP Committee Member, and a graduate of the 2014 Republican Leadership for Georgia Class. Locally, he is a former Chairman of the Upson County Republican Party, a Deacon at Trinity Baptist Church, past Thomaston-Upson Arts Council (TUAC) President, and has coached youth sports in Thomaston-Upson County for more than 15 years.

J.D. was raised most of his life in the Silvertown Mill Village and still currently lives there. He believes that it is an honor to be chosen to serve all the citizens of Thomaston.  J.D. feels that it takes a team effort of not only the Council, but also every City of Thomaston employee to make Thomaston one of the best cities in Georgia.  "We have a great team from the Council, City Manager Russell Thompson, Departments Heads and Supervisors, and every employee.  Each position is vital to our success."

J.D. also knows the importance of working with the Council, as well as the Upson County Commissioners.  "We want  to make Thomaston and Upson County the best place to live, work, and raise a family."